A silicon wafer coated with a SiO2 dielectric film is used as a base. An additional layer of Ta2O5 is deposited on the SiO2 layer using solid-state frequency laser radiation. Then a film of catalytic metal (Pd) is deposited onto Ta2O5. The temperature of the MIS structure is maintained in the range of 80-200 °C, measured by a thermistor and stabilized by an electronic circuit. 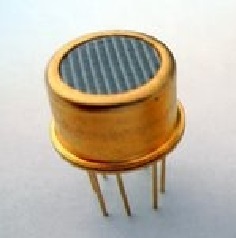